The History of IOA: How John Ritenour Grew a Global Agency

Founded in 1988, Insurance Office of America (IOA) will forever be a monumental part of John Ritenour’s life and legacy. As both the co-founder and former Chairman and CEO of IOA, Ritenour has been with the business from the very beginning. Across the United States and London, the agency now has more than 1,000 associates throughout its 50+ branches. But exactly how did it all get started, and how did Ritenour build this business from the ground up? Take a look at the brief history of IOA to find out. 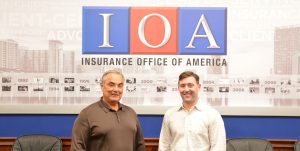 The Early Days (and Name) of IOA

John Ritenour and his wife, Valli, had years of experience in the insurance industry — as both employees and business owners — before they created IOA. In fact, it was the different types of leadership, principles of business, and management styles the Ritenours witnessed over the course of their pre-IOA careers that influenced what they did and didn’t want the company to represent. After contemplating which values they wanted to run their business by, John and Valli decided to start a company that put people first.

Although John and Valli had big dreams for IOA when they founded it in the late 80s, they didn’t quite expect that it would reach nationwide or international success. That’s why the Ritenours originally named the agency something a little different: Insurance Office of Florida (IOF). Based in Apopka, FL, IOF started as a small, three-employee agency but soon blossomed into something much bigger. Securing new clients, moving offices, and growing by 50% over the span of just four years, IOF exceeded every goal the Ritenours set in place.

In the Community and Across the Country

Building up the IOF team and reaching new revenue peaks each year, John Ritenour and Valli wanted to see the agency more involved in the local community. In 1995, the IOF team ran its first inaugural corporate 5k race along with other Orlando businesses striving to promote health and wellness in Central Florida. After purchasing its very own building, the agency relocated to Altamonte Springs, FL, the following year. Shortly afterward, IOF expanded once again — but this time, it was across state lines. In 1997, IOF opened its first out-of-state branch in Cherry Hill, NJ, and officially changed the agency name to IOA.

From landing a spot at #78 on the top 100 Broker List to becoming the official insurance broker of the Orlando Magic, IOA kicked the 2000s off on a high note. In 2002, Ritenour and his team unveiled the sleek, iconic logo the agency still uses today. In that same year, John Ritenour and other leaders of the company closed a deal that helped IOA acquire Match Up Promotions. To celebrate the agency’s non-stop growth and its team of associates across the nation, IOA also started an Employee Stock Ownership Plan in 2003.

The very next year, IOA headquarters moved to Village Plaza, and the agency introduced two new subsidiaries: Payroll Office of America (POA) and Village Fitness. In 2005, IOA unveiled Web Solutions of America — a full-service digital marketing agency — and closed out the year having earned over $50 million in revenue. The company continued to open more branches across the nation and experience continued success, but John Ritenour soon decided that it was time to step down from his position as CEO.

The IOA Board of Directors appointed Ritenour’s son, Heath, to become CEO of the company in 2007. Together, Ritenour and his son continued building the agency’s sports clientele — partnering with teams like the New Jersey Devils, Atlanta Hawks, Jacksonville Jaguars, and Charlottesville Hornets — in the years that followed. In 2012, John, Valli, Heath, and the IOA team celebrated as the agency surpassed $100 million in annual revenue. On the heels of yet another milestone, IOA launched its own software to help companies manage their business and insurance risk: RiskScore.

John Ritenour helped IOA advance throughout the United States, and in 2014, he watched the agency spread into international territory. Under the name ACN Services London, IOA officially became a registered broker of the Corporation of Lloyd’s. Just a year following the international expansion, IOA hit the 1,000-employee mark and soon thereafter was recognized as one of Business Insurance’s 2016 Best Places to Work in Insurance. The agency and its leadership continued to receive accolades throughout the community and industry. Below are some of the most memorable agency highlights of the late 2010s:

As John Ritenour stepped down as Chairman of IOA in 2019, Heath stepped in to further the initiatives, events, and activities that his father helped to inspire. Now, the two continue working together as John Ritenour slowly prepares the company for his departure. While the history of IOA will continue even after he has fully transitioned into retirement, the core of the company’s mission, vision, and values will always serve as a reminder of Ritenour’s dedication to working hard, serving the community, and putting people first.